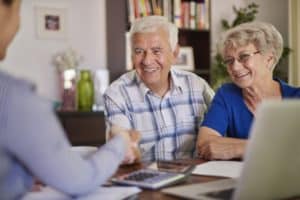 Stockbrokers and financial planners are required by law to “know their clients” and recommend investments that are appropriate for them. The rules governing brokers require that they have reasonable grounds for believing that every recommendation is suitable for the customer. The broker (often called a “financial consultant”) must obtain information concerning their clients’ financial condition and investment objectives before making a recommendation. Certified Financial Planners are held to even higher standards.

For retirees, or people approaching retirement, suitable investments mean conservative investments, where life savings are protected. The investment should earn income for them to live on, through interest and dividends. This is because retirees cannot afford to lose their retirement savings. After a financial consultant invests a client’s money, that advisor should continually monitor the client’s investments and personal situation. Financial advisors are required to warn their clients if the investments are not working out or pose more risks than the client should be exposed to. Good advisors suggest alternate investments that are more suitable. Financial consultants cannot just sit and watch as their customers’ life savings disappear.

Financial advisors are also required to provide “full disclosure” to their customers. This means a broker must give the customer all relevant facts about the potential risks of an investment as well as fees that the customer will be paying.

In the last 10 years there have been two major stock market “crashes” where brokers, in many cases, failed their customers. The bear market of 2000-2002 followed the “high tech bubble” of 1998-2000. Many brokers forgot that most retired client should hold conservative investments. Instead, many brokers placed their clients in speculative stocks and go-go mutual funds. When the high tech market crashed, financial advisors failed to warn their clients about protecting their retirement funds but, rather, told them to hold on to the speculative stocks as they collapsed. Retirees were harmed financially, often suffering permanent shrinkage in their income and standard of living.

Individual investors have rights to recoup losses if their financial advisor did not provide suitable investments, failed to protect against large losses, or committed fraud.

In 2007-2008, another crash occurred after the “real estate bubble” and reckless speculation by Wall Street firms put the entire financial sector at risk. Appallingly, some brokers recommended safe-sounding investments while their firms were betting against their own clients that the securities would lose value. When the market meltdown occurred in 2008, and banks and brokerage firms received federal bailouts, many retirees again lost a large portion of their retirement savings. The big companies were saved. Once again, it was individual retirees who sustained massive losses.

Financial advisors cannot predict the future. Many are trained only to sell their firm’s products to you. Because financial consultants are not clairvoyant, one of their most important duties is to protect their retired clients against risks. While some astute advisors understood the importance of minimizing downside risk, and a few recognized the “bubble” conditions of 1999 or 2007, most financial consultants failed to warn their clients of the need to protect their assets against the risks of large losses. For their clients, the results were catastrophic.

Occasionally, financial advisors commit outright fraud. They sell non-existent investments, or get their clients into ponzi schemes, or simply steal their clients’ money. Hawaii has seen a number of such scams and schemes.

Individual investors have rights to recoup losses if their financial advisor did not provide suitable investments, failed to protect against large losses, or committed fraud.

Individual investors should not assume that their losses were unavoidable or were caused by “the market” and that they have no remedies against their advisors. If an investor believes that they were misled into unsuitable, excessively risky, or fraudulent investments, they should consult an attorney to consider whether they have rights to recover some or all of the money they lost.