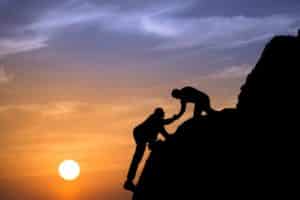 Partnering is a process that was originally developed and used in the construction industry to redesign the relationship of all stakeholder parties so that project-related problems were resolved in a cooperative manner before they escalated into conflicts, disputes and lawsuits that would have delayed the project and added costs. As a proven conflict prevention approach, the principles of Partnering can be applied to any project or group working together.

The Partnering process stresses the importance of developing positive relationships, honest communication and moving beyond differences to achieve a common vision and goals. It addresses miscommunication, misunderstanding and personality clashes that can impact productivity, delay timelines and affect success. It focuses groups on prioritizing action steps, to efficiently implement a plan and achieve the targeted goals. It strengthens collaboration, communication and mutual respect. It seeks to ensure that key project participants and their employees understand and share the same vision and have a plan in place to minimize the potential for disputes that can destroy a project. These concepts are core needs in a broad variety of settings such as governmental agencies, non-profit organizations, business transactions, board of directors and community groups guided by a common mission.

The Construction Industry Institute defines partnering as  a “concept that focuses on making the goals of the owner, contractor, designer and supplier better understood and easier to manage. Partnering outlines mutually attainable goals, satisfies long-term needs and assigns risk among all the parties involved”. Typically, a neutral party assembles the key players (owner, designer, contractor, subcontractor, supplier and regulatory agency) of a project to agree on project goals and establish a process for resolving conflict. In the words of the Associated General Contractors of America:

“Simply put, Partnering is just people working together – a voluntary system of handling normal, everyday jobsite construction problems in a mutually agreeable manner before they turn into major issues that create lawsuits. There is no mystery about partnering; it is simply an attitude change. All stakeholders resolve that issues be settled by peacefully employing a positive and cooperative approach.”

Unlike a construction project that has a defined beginning and end and readily identifiable goals and process steps, projects in other settings may be ongoing and involve a wide range of participants with divergent goals and ill-defined action steps. They still lend themselves to the central element of the Partnering process: participation by key stakeholders in a retreat led by an experienced facilitator. The retreat focuses the participants on their commitment to their mutual goal or mission, and assists them in identifying and agreeing on guidelines for effective communication, coordination and cooperation to prevent conflicts and ensure the mission or goal is achieved. Among other things, at the retreat the participants:

The facilitator captures the ideas and agreements that are generated in the retreat on a flip chart as a group memory and later provides them to each participant. The interaction builds stronger working relationships and elicits ideas and agreed upon steps to follow later when challenges and problems arise.

Ideally, everyone involved in the project, team or department must agree to be involved in the partnering process, including completing a pre-survey and participating in the retreat. Pre-surveys provide insights into the group and project issues which allow the facilitators to customize a retreat agenda to meet the needs of the people participating, including appropriate exercises and activities designed by the facilitator. The retreat should be conducted in a comfortable setting outside of the typical workplace and may take one or two days, depending on the size of the group and the complexity of their project or goals.

To ensure the greatest success, following the retreat, the charter and action steps should be regularly reviewed and updated by the group, reinforcing their commitment to working together and evaluating their progress to achieveing the goals that the group agreed on at the retreat. Consistent re-evaluation of how things are working ensures that the group doesn’t slip back into old habits and further strengthens communication. It provides satisfaction that the goals are being achieved and re-energizes the group to continue working together towards their shared vision.

Partnering for businesses and other organizations creates an entirely new paradigm in their working relationship that allows them to succeed on the current initiatives, as well as future ones.

Scheduling follow-up reviews is an extremely important component of Partnering for businesses, organizations and other groups that will continue working together in the future (unlike construction projects that generally bring in different players for one specific job that eventually comes to an end). Partnering for these groups creates an entirely new paradigm in their working relationship that allows them to succeed on current initiatives, as well as future ones. To ensure that the new paradigm replaces the old way of operating, regular reviews must be scheduled in which the group charts its own progress. Through an established routine of meeting to celebrate successes and brainstorm ideas to overcome challenges, the group builds on the positive outcomes generated from the Partnering retreat.

People strive towards a common vision, and want to succeed. Participation in a Partnering process before commencing the work to achieve that vision will lay the foundation for success.Partnering is an excellent strategy for strengthening the working relationships and increasing the productivity of the individual teams, departments or even inter-departments within a company.

It is important to remember that Partnering is a conflict prevention rather than a conflict resolution process. It is not a substitute for mediation or other dispute resolution processes for groups already entrenched in conflict to work with any group, large or small, that in involved in a joint project or has a common goal or mission. Examples include but are not limited to:

However, to ensure that a Partnering process is successful, the key stakeholders of the group must be committed to investing the time it takes to makes it work. Without the pre-planning (including a pre-retreat survey), full participation in the Partnering retreat, the post-retreat follow-up and the integration of progress evaluations into the regular routine of the group, the positive impact of Partnering will be diminished.

Finally, there is no one set approach or recipe for successful Partnering. While every Partnering process involves a pre-survey and a retreat, the questions in the survey as well as the exercises and activities conducted during the retreat depend on the make-up and specific needs of the group. For example, people in a department who have been and will continue working together for a very long time may benefit from more team-building activities, exercises that help them assess their current paradigm to determine what is and isn’t working well, and the problem-escalation ladders to address conflicts that may arise in the future. On the other hand, a group that will only be working together for a limited time period, such as a Board of Directors, may need to focus its energy on identifying measurable goals and clear action plans to achieve those goals before their time is up.

The three key elements to keep in mind for a successful Partnering process are: